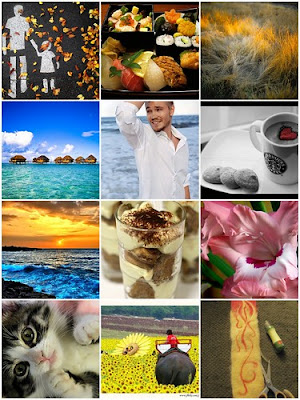 I really had fun doing this! :)

As seen at knitorious

Directions:
a. Type your answer to each of the questions below into Flickr Search.
b. Using only the first page, pick an image.
c. Copy and paste each of the URLs for the images into fd’s mosaic maker.

"Your journey has molded you for your greater good, and it was exactly what it needed to be. Don't think that you've lost time. There is no short-cutting to life. It took each and every situation you have encountered to bring you to the now. And now is right on time."
-- Asha Tyson


Our town was slammed yesterday by the storm that rolled through here like a freight train. All four counties were without power. I’ve lived here 13 years and never have I seen us hit so hard. Needless to say, I was all set up to run a myriad of errands…like any other day…after work. NOTHING was open. I was kinda shocked. No gas, no bank, no post office…all the food establishments were down. The town was black and everyone was wondering what to do with themselves.

At home, I couldn’t do laundry, open the fridge or freezer, turn on hot water or see without a lantern in most areas of the house. I called my sis and my BIL to tell them we were without power. I called Mom to see if she was faring okay since she is in the same town I am. And as I hung up the phone I realized the Goddess was giving us a day to just be. The list of things that I had to do would get done at a later time. They could wait.

Our power strip blew and a few of the circuits were tripped but in all reality, we were doing fine. I gave DH a massage since his shoulder was hurting and we just laxed for a while. There was no reason to rush or hurry since there really was little we could do. It was like we were, for a moment in time, absolved of all duties and worries.

We went out to I-Hop for dinner 30 minutes away where they had power and ate a leisurely meal. Mom called to say she was okay. We played games on the kid's mat with our son. It was a nice divergence from the norm.

When we got home there was enough light to stuff mice with my son. He really likes the stuffing part. When the power came back on four hours later, I didn’t rush or hurry to catch up because I wasn’t behind…I was right where I should be.